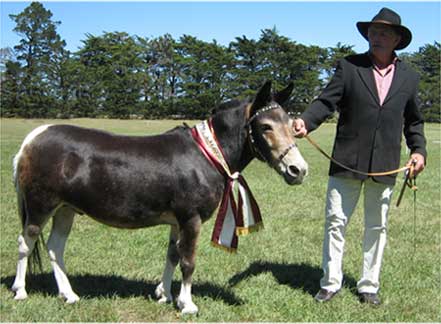 Donald was His Name 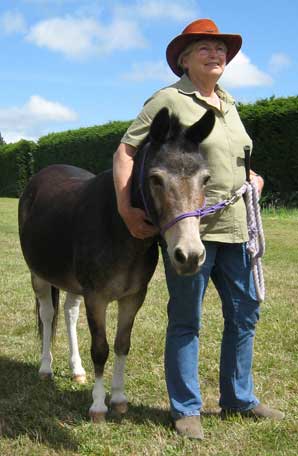 photo Lea Hullett
A few years ago, a friend in the North Island went along to a local petting farm, clearing sale. She was keen on purchasing a pet Alpaca, being advertised. The alpaca was just what she was looking for but, on making more enquiries, the owner was very insistent that the alpaca had to be sold with his paddock mate, Donald. Now this Donald was no duck, by any means. He was a mule, and thought to be around 8 to 10 years old.
There was not much time to think about it, as others were very interested in the alpaca. A price was agreed and after lengthy pushing and persuasion, the paddock mates were off to their new home.

My friend was very excited about the new additions to her small farm. It was decided the alpaca would be used for stud duties so Donald the mule went to live with the Shetland ponies. This was not an ideal situation for the mule as he was very dominant over the hay, aiming with both barrels to guard all piles and chasing the ponies from their food. The ponies were very stressed with this out of control, hand-fed, spoilt, mule

So, out of concern for the ponies, Donald was advertised for sale on the Internet. At the time there was very little demand for mules, so there were no interested buyers. I had said on many occasions, I would take him, but the reply was always, “You don't want him! He's bad news and would be no good to have with your ponies”. However, over time, with my persistence, it was agreed that Donald would come to live with us in the South Island.

The transport was arranged and the truck arrived for Donald. It took the poor driver one and a half hours to load him and we were told he would never transport another mule again. “He's dog tucker!” said the driver.

It did make me wonder what was going to arrive and what we had let ourselves in for, so with two extra helpers, John and I headed off with the float, to meet the transporter.

We arrived in good time. They were just unloading the truck. “Stand back”, said the driver as he opened the door, and there he was, in the flesh! The most beautifully marked black & white mule, close to 11 hands. He looked as if he could have Welsh x Shetland breeding. This handsome fellow took no coaxing coming off the truck. He came down like lightning with the driver only just managing to hold on to him. You could see this mule had a mind of his own.

It took five of us to load him onto our float!

In the time before he arrived I kept thinking the name Donald, for this mule, is not a name I can live with. So we decided, with a new home comes a new name and a new chapter in his life. We agreed that El Donto would be a great name for our new fellow.

We arrived home late in the day and put our new addition in the yard next to the house for the night, with a pile of hay.

The next morning we were greeted with a musical call that couldn't quite put itself together. Whinny or bray, we found it really delightful, as we had never heard a mule before.

He obviously liked to make his presence known as he continued to call until we came out of the house.

I decided to spend time with Donto so we could get to know one another. He was pleased to see me, but, as I entered the yard, his tone changed and with ears back I could read him telling me, “if you haven't got food for me, get out of my space” and he turned his backside to me, gesturing a hind leg. It was very easy to see this mule had been hand-fed and very spoilt, at the petting farm.

Being a person who doesn't let an animal run the roost, with a small gesture and a few stern words, Donto now found himself tied up in the yard!

y next step was to give him a brush all over thinking this would be a good way for us to get to know each other. But this was not to be! Donto became very unsettled, swinging himself around and almost knocking me over. It was very obvious he was telling me, “Get your hands off me, all you are meant to do is look at me and feed me”. “OK, Donto” I said, “it looks like this is going to take some time”, so I spent the next hour just talking to him and rubbing around his face and ears. I'm sure he enjoyed listening to all the rubbish I was telling him about my life and his future with me.

The following morning I decided he needed to be moved to a small paddock with some nice grass. The catching thing he tried on again, but we soon had that all sorted! With a very stern, “Stand up!” he was mine.

I was feeling very pleased as we walked out of the yard, but suddenly, Donto was off. There was no way I could pull him up but I'm not one to let go of the rope.

Years ago I worked for an old horse trainer who was from the 'old school' in handling young stock. He always said, “Girlie, hang on to that rope and don't let go or you will teach them a bad habit”. So it was all on! I felt like I was doing some kite flying, the only problem being that I was the kite on the end of the string. My feet didn't have time to hit the ground as Donto dragged me down the drive, stopping at the gate and looking around as if to say, “Oh, are you still on the end of that rope?” He had such a cheeky expression on his face!

Donto certainly had a mind of his own and was just too strong to lead on a plain halter.

It was time to make a purchase at the saddle shop. A good strong rope halter was the thing to try and what a difference that made, just the first time we used it. Now we had some control in leading.

As the weeks passed I made a point of catching him every day. I would open the gate and Donto would come up and face me ready for his halter. He was now really enjoying going for walks and we were building a real trust together. He even began following me up into the float but wasn't too keen on standing inside for long, the first few times.

Donto was very quick to learn anything.

It was amazing how he would stand and watch me latch the gate and then, when he thought no one was around, he would spend time fiddling the latch with his nose and mouth until he had it open. This happened on several occasions.

One time I came home to find Donto dragging a full sack of chaff around, trying to get it open. Our Donto is a 'food-oholic'. He will do anything to get to food! Having been hand-fed for years, he will always have that spoilt trait in him. If he sees someone eating something he will just about come over the gate to get at it. But we take care and make sure he's not hand-fed or teased anymore.

Donto had progressed so much over the months we were now using an inhand bridle and he was very happy to walk, trot and stand next to me. He was also very good at long-reining, using a hackamore, as he was not happy with a bit. This suited him fine.

The new chapter in Donto's life was looking pretty good. He was becoming very nice to handle and I felt confident that we could enter him at the South Island Donkey & Mule show.

The day before, we needed to do the wash thing, and get him looking beautiful. First we used the vacuum cleaner to blow out the clay dust. I had a feeling he might flip his lid, but all he did was squeal like a pig and then just stood with a look of enjoyment as the warm air blew all over him. The washing and putting on of covers were no problem. He was becoming very accepting.

The next morning Donto loaded on the float like a dream. He looked amazing at the Show, was so well behaved, much admired and did really well in all his classes. 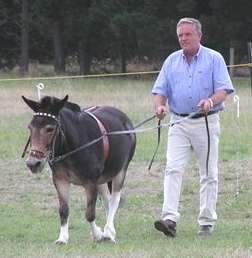 We did the in-hand, bending race and he went around the poles so fast you could tell he just loved all the action. John took him in the long-reining, obstacle class and you would have thought he had been studying the plan of the course all night! He loved the attention so much he was not keen to leave the show grounds and all the people but, with those few 'stern words' and some helping hands, he was off home.

Donto has been to many shows since and seems to really enjoy them. It's always the same at the end of the day. He's never keen to leave all that is so interesting to him at the show grounds, but we have mastered that now.

Donto has now been in harness a couple of times and he is very good and willing. He's also good in pack gear. He might be small, but he's a great walker and looks the part.

He is a mule with loads of character and a chatterbox, in his own mule lingo. We think he understands every word we say. If a mule was ever needed to audition for the part of “Francis the Talking Mule” then, he is it! We could never forget to feed him as he will just stand and rattle the gate, all night. He is always willing to teach us a new trick he has dreamt up, just to keep us on our toes, and would rather not live with other equines, preferring to be with people.

He loves being able to see what is going on in our house, maybe keeping an 'eagle eye' on what we could be eating!

Our boy has now been with us for a few years and has come a long way from being that badly spoilt, “dog-tucker” mule! El Donto is much loved and admired by all who meet him and a real treasure to own.

A judge made the comment one day, “I'm sure this mule has lived in this world before. He knows it all”. I'm sure that judge was right. 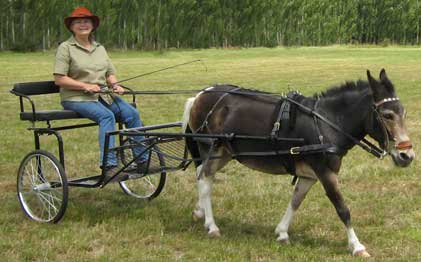 Diana Humphries with El Donto at the Information Day and at Kaiapoi February 2007 and run by Canterbury members of the Donkey & Mule Society. El Donto responds very well to be driven in a Hackamore. (bitless bridle) photo Lea Hullett